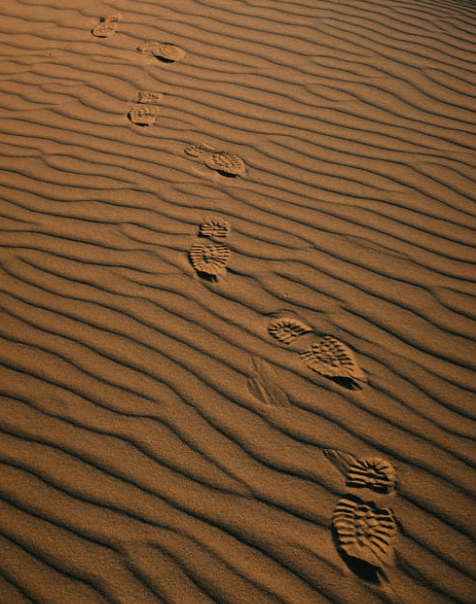 We  all  leave  footprints

The only difference is what kind of footprints. By now you will know that I’m a huge fan of wild camping and cycle touring. Like everything else, both those activities can and do leave footprints.

When wild camping, the number one rule is simply this: Leave No Trace. Sure, at the spot where you’re camping, there will be tyre tracks, and physical footprints, in addition to the footprint your tent or bivvy will leave when you pack up in the morning. However, a day or two later, if you did it right, there will be no sign at all of you having camped there. Your footprints will be gone.

Some  footprints  should  last

Years ago, I was working in downtown Jo’burg. I used to work in ForEx, for a merchant bank (yes, I wore a suit to work each day). For reasons I can’t recall, I was having a rubbish day and needed to escape the office, so took a break. Walking along the crowded pavement, up ahead I saw a man furiously handing out something to anyone within reach, while wearing a huge smile. Expecting it to be marketing rubbish, I tried to dodge him, but he zeroed in on me. The easiest way to get rid of people like that is to just take what they’re offering, so that’s what I did. For some obscure reason I didn’t chuck it in the nearest available bin and when I sat back down at my desk, I looked at it. It was a business card, printed with raised ink on expensive card, and this is what it said:

You are a wonderful person, and someone loves you very much.
Love, Willem

I was amazed, and instantly my bad mood vanished. Willem (the Afrikaans version of William) had spent good money on getting those cards printed, just so he could spread some happiness to random strangers. Isn’t that a wonderful thing to do? As long as I live, I will always remember that incident. My only regret is I didn’t read it immediately, thanked him on the spot, and tried to learn what caused him to do that. But I still smile every time I think of that incident. Willem left a permanent footprint in my life.

Not  all  footprints  are  visible

Every single thing we do has an impact. Almost every single thing we do has a carbon footprint. It is absolutely impossible to avoid having a carbon footprint, but it is entirely possible to vastly reduce your own. Of course, to see how successful you are at reducing your CO2 footprint, you need to measure what it is first, and this tool, from WWF, will help.

You cannot single-handedly stop climate breakdown, but you can take responsibility for your personal CO2 footprint. The two biggest changes most people can make right now is to reduce (ideally stop) driving, and to reduce (ideally stop) red meat consumption. Beyond that, there’s a clue in the old slogan of Reduce, Re-use, Recycle. Most people focus on the last, and least impactful part of it. Sure, recycling is important, but we sure can’t recycle our way out of the mess we created. Far more important is Reduce and Re-use. Stop being such a good little consumer. Buy less. Fix what you have, instead of simply replacing it. Be damn proud of buying second-hand items.

The CO2 footprint embedded in the manufacture of a car is extremely high: 6 tonnes for a Citroen C1, 17 tonnes for a Ford Mondeo, and 35 tonnes for a Land Rover Discovery. That’s the CO2 footprint of a car that will NEVER be driven, and driving will emit further CO2. The C1 will emit a further 18 tonnes of it’s average lifespan, the Mondeo will emit an additional 27 tonnes and the Discovery will emit a whopping 43 tonnes of CO2. It is for this reason that the best thing you can do, if you absolutely must drive, is to keep your existing car going for as long as possible, and to drive as small a car as you can get away with. If you switch to cycling just one day per week, you already are making a big dent in your CO2 footprint, and you will gain many health benefits.

The European Cycling Federation calculates the CO2 footprint of an average cyclist to be 21g per kilometre. That includes the embedded CO2 in manufacturing the bike, as well as that of the food that cyclist needs to be able to cycle. Vegetarian and vegan cyclists will have a significantly power CO2 footprint for every kilometre cycled.

We all leave footprints. Which ones will you choose to leave?