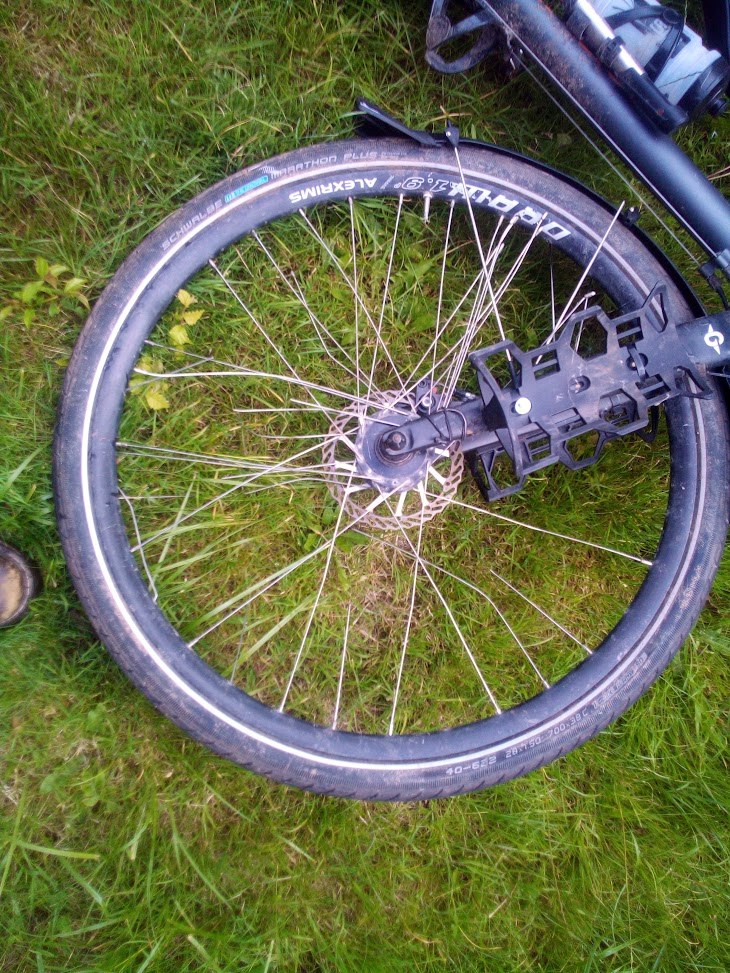 Better world1 Comment on Old is the new new

Some five weeks ago I had a serious crash, breaking my collarbone in two places. I also broke four ribs. I don’t know exactly what happened, as I was knocked unconscious and I have a gap in my memory. From the damage to my bike’s front wheel, it seems something got caught in the spokes. As a result, the wheel was destroyed, and I crashed quite hard.

Besides a completely destroyed front wheel, my bike took quite a beating. Damage to the shifters and the rack suggests it flipped. The shifters took damage, the front and rear mudguards took damage too, plus various other bits and bobs. On Twitter I had the inevitable “That’s a great excuse to buy a new bike” type of comments. In case you still didn’t know, cyclists have a running joke stating the optimum number of bicycles to own is N+1, where N equals the number of bikes you already own.

Everyone loves new things, right? And New Bike Day is always a great day! So it’s all good, isn’t it? Well, it can be good, but that’s just one option. Regardless of N+1 jokes, overconsumption is possibly the single biggest motivator leading to climate collapse. I prefer a circular economy.

In a circular economy, things aren’t simply disposable. You don’t buy something, use it for a while, then discard it. Capitalism wants you to do that, as it drives ever increasing profits, but that is the reason why we’re staring into the abyss, on the cusp of runaway climate change. In a circular economy, we repair things, and sometimes repurpose it. This may come across as a bit preachy, but these are my core values, and I practice what I preach. I often buy second-hand, and I repair what I can.

Getting back to my bike, the front wheel was too damaged to repair (as a bicycle wheel). That meant I simply had to replace it entirely with another hub-dynamo wheel. The shifters were quite damaged, as was the front mudguard, and the bar tape was ruined. Previously, I obtained a set of shifters that are in excellent condition, despite being used. They’re for a triple chain set, which is good, as I had for a while planned on upgrading my bike to a triple. After all, it’s a touring bike, and I want gears that can easily haul a fully-laden bike up big and steep hills.

I removed the bar tape, replaced the shifters with the new (to me) ones, then put on new bar tape. The front wheel was a doddle to replace, and the front mudguard needed some forceful convincing to get back into the shape I need it to be in. I used this opportunity to replace gear and brake cables, too. The rack carries scars from the crash, but as far as I’m concerned, that just adds character. I fixed my bike, and it’s good to ride for many thousands of miles again. All for the price of a new wheel, and new bar tape.

Remember I said the failed wheel was too destroyed to be used as a bicycle wheel? The rim is beyond repair, as all the spokes are either broken, or suspect. Even the hub has taken damage, so how can any of it possible be repurposed? Well, I have another old rim, and some old spokes. I’ll be rebuilding a wheel using that and the old hub dynamo. When done, I will fit wind blades to that wheel, and use it as a wind turbine, to generate power whenever the wind blows. In my garden I built a BBQ shack, using timber felled literally 7 metres away. I will be equipping that with a hefty power bank, and use the power generated by the dynamo to charge the power bank. In turn, the power bank will run the USB lights in the BBQ shack. All that will go recycling is the original rim and spokes, and the destroyed bar tape goes to waste.

Look at the terrifying recent heatwaves. Climate breakdown is undeniable, and is all around us. Each and every one of us has a duty to combat it, and that begins by consuming less. Buy second-hand, and be proud of doing so. Repair, or repurpose whenever you can. I suspect you’ll enjoy doing so more than you realise. Stop being a good little consumer.

Honestly, old is the new new. Get ahead of the curve!

Old is the new new

One thought on “Old is the new new”