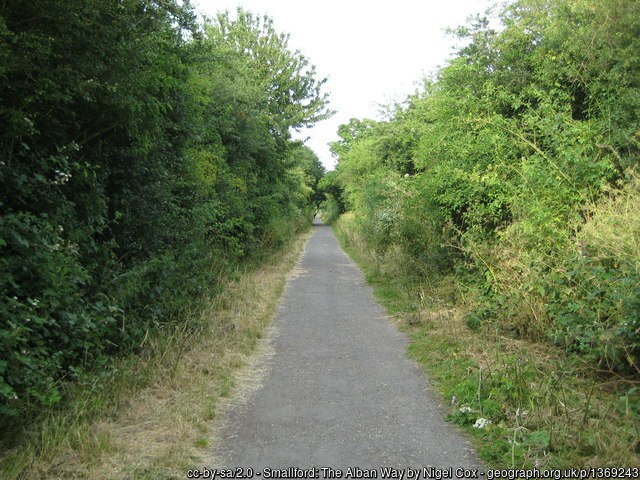 With limited on-road cycling, it is possible to combine this route with the Cole Green Way, and the Escape The City route, to cycle into the heart of London.

Surface on the Alban Way

The surface is tarred throughout, and is very smooth. In some places, it is a bit narrow.

Any kind of bike can use the route, including trikes, tandems and cargo bikes.

Lovers of old buildings will enjoy the St Albans Cathedral, as well as Hatfield House.
On the site of the old Hill End Station there’s a memorial garden for people who used to be housed in a former mental hospital, adjacent. The memorial garden is on what used to be the hospital’s graveyard.

There are no barriers along the route, though there are bollards in places. Trikes and cargo bikes should be able to easily get through.

Forecast for the Alban Way

Getting to the Alban Way

The route on the map below starts at at the St Albans City train station, and ends at the Hatfield train station. Don’t be fooled though: to get a train between the two stations involves changing trains in London. However, it makes for a great, family-friendly day out for Londoners. As ever, read my Bikes On Trains guide for useful and helpful tips for taking your bike on the train.