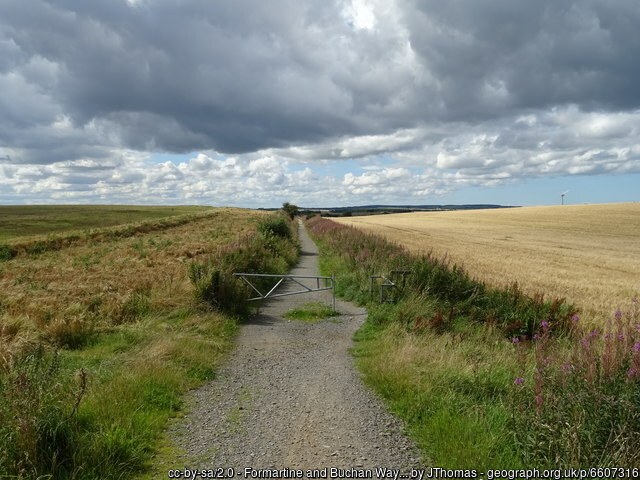 The Formartine and Buchan Way follows a disused railway from Dyce (near Aberdeen) to Maud. At Maud, it branches, and you can opt to ride east to Peterhead, or continue north to Fraserburgh. As you’d expect from a former railway, the route is relatively flat.

As the digital maps only allow continuous routes, this route guide is unusual in that it contains two maps. The first is the route from Dyce to Fraserburgh, while the second is for the spur from Maud to Peterhead.

This route allows walkers, cyclists and horse riders, so do remember to slow down when encountering horses. Also, when approaching horses from behind, either talk or sing all the time, so the horse can hear where you are and won’t be startled.

This is a long route – 40 miles from Dyce to Fraserburgh – over at times difficult terrain. Additionally, it is a rural area, so you will need to be self-sufficient.

Surface on the Formartine and Buchan Way

The most of route is unsealed, and can get very wet. In places, the route surface is tar, for large segments it is compacted gravel that’s rather good, and in places it’s effectively a single-track.

You’ll want a gravel bike, a sturdy hybrid, a touring bike or a mountain bike. Though trikes and cargo bikes can use significant parts of the route (at least from Dyce to Maud) there are large parts where they would struggle.

Spend some time in the Railway Museum in Maud, and enjoy the stunning beach in Fraserburgh.

There are some barriers along the way, but most bikes should easily be able to get past.

Forecast for the Formartine and Buchan Way

Getting to the Formartine and Buchan Way

It’s possible to cycle to the start from Aberdeen train station, along . As ever, read my Bikes On Trains guide for useful and helpful tips for taking your bike on the train.