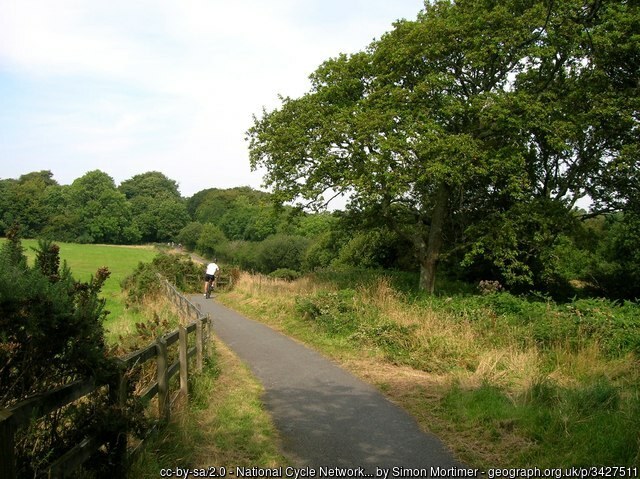 The full route includes sections on the shared pavement, next to roads. In Haverfordwest, those roads can be busy, and you will need to be very careful if cycling with young children. Once in Haverfordwest, parts of the route is on (usually) quiet roads. There are a few minor road crossings along the route, too.

The route gets its name from the most famous Victorian engineer, Brunel. He used Neyland as the base for his ferry service to and from Ireland, and he also built the railway to Pembroke Dock, as well as the now-disused railway that the trail follows.

There is the option to start in Haverfordwest and cycle to Johnston, then get the train back.

Surface of the Brunel Trail

Any type of bicycle can be used along this route. However, before planning a trip using a trike or cargo bike, first read the Barriers section.

Spend some time visiting the ruins of the Haverfordwest castle, or the priory.

There are some lazy chicane barriers on the route, and those are far apart enough to easily allow trikes through. Cargo bikes should be able to get through with care.

Unfortunately, there are some A-frame barriers, too. Though wider than most, trikes and cargo bikes may struggle to get through.

You can hire bicycles at either end of the trail from Pembrokeshire Bike Hire.

Forecast for the Brunel Trail

Getting to the Brunel Trail

You can get to Haverfordwest by train, and do the route as a there-and-back. As ever, read my Bikes On Trains guide for useful and helpful tips for taking your bike on the train. You can also get to Pembroke Dock by train, though getting onto the Brunel Trail will involve cycling at least on some roads.

Your only other choice is driving there. There is free parking over weekends at either end of the trail.