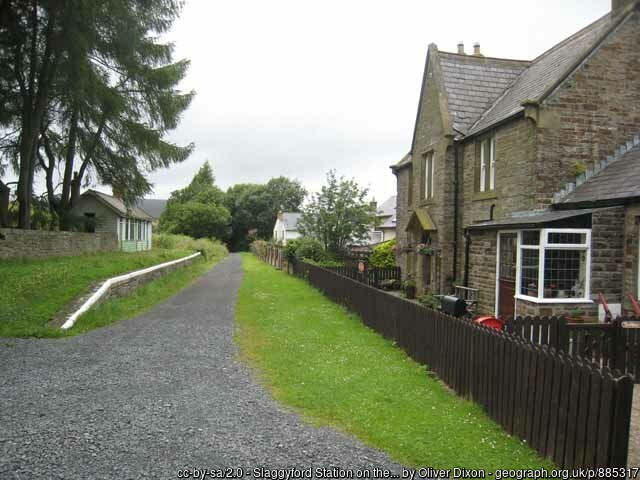 Let me start this guide with an important notice: overall, the South Tyne Trail is not a family-friendly, easy route, though parts of it (notably between Haltwhistle and Slaggyford) can be family-friendly. This can best be described as a gravel route (with parts on tar) containing some challenging bit, as well as parts that can be very muddy.

Despite that, it remains a gorgeous route through a stunning landscape that is brimming with history.

Surface on the South Tyne Trail

You will start and end the ride on tar, but in-between you will be riding on grass, self-compacting gravel, and plenty of mud. In places, the route is effectively singletrack.

There are several pubs in Haltwhistle, and again in Alston, but absolutely nothing directly on the trail in between. At 3.8 miles in, the Wallace Arms pub is very close to the trail. As you reach a road crossing, the pub is a few hundred metres to your left.
At Slaggyford there is a water point available. When you get to the road, turn left – it’s around 200 metres further. The South Tyneside Railway has a cafe in an old dining car, at Slaggyford station, which is open all week (except Mondays) from 10h00 to 15h30, incl bank holidays.

You will want a gravel bike, or a sturdy hybrid with chunky tyres. Mountain bikes would also be suitable.

There are toilets in Haltwhistle, and again in Alston, but nothing directly on the trail in between. See directions to the Wallace Arms above though.

Enjoy the views from the spectacular Lambley Viaduct. Built in 1852, it is 30 metres above the valley floor.
Hadrian’s Wall, and the remains of a Roman fort is near Haltwhistle, and Alston is England’s highest market town.

The South Tyneside Railway is a heritage railway between Alston and Slaggyford, and they do carry bicycles.

There are no barriers along the route, but there are plenty of gates. One is a 5-bar gate that at times was locked, so be prepared for that.

You can hire ebikes from Hadrian Cycling, in Haltwhistle.

Forecast for the South Tyne Trail

Getting to the South Tyne Trail

This route is in a very rural location. You can get to the start, at Haltwhistle station by train, to have a car-free day out, by taking your bike on the train. As ever, read my Bikes On Trains guide for useful and helpful tips for taking your bike on the train.
Your only alternative is to drive to the trail. If parking at Alston station, be aware that the car park is locked when the café closes, so ensure you’re back in time!