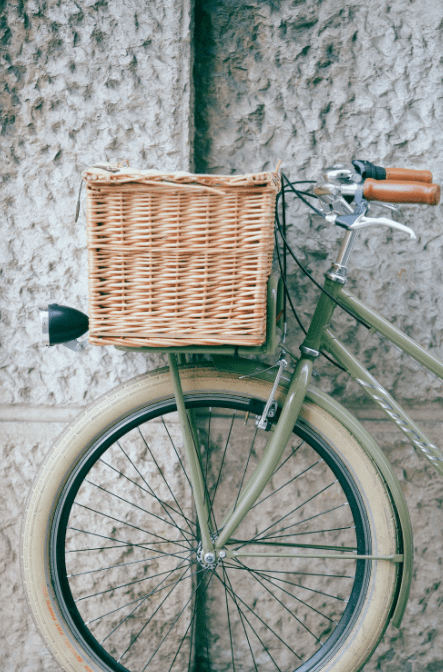 There are different reasons for carrying luggage on the bike, ranging from commuting, to shopping and touring. Obviously, cargo bikes are an option, as are trailers, but in this post I want to focus on luggage being carried on a “normal” bike.

When I first started cycle commuting, I simply carried a backpack, and indeed, many cycle commuters ride with backpacks. There are downsides to backpacks, though: for starters, even with the most well-ventilated backpacks, you will get a sweaty back. Add to that the fact that your centre of gravity is much higher, when cycling with a backpack, and that your back, arms and especially wrists may soon start feeling the strain – especially on long rides – and backpacks soon start revealing some serious drawbacks.

How you carry luggage is heavily influenced by the bicycle itself. For example, a carbon road bike won’t even have mountings for mudguards, let alone a rack. There are road bike specific racks, but they tend to be specialist items, aimed at a rather niche market, and I’ll ignore those for now.

Mainly, you have to choose between carrying luggage on your body, or on your bike.

If you have a short commute, on good, flat roads, you can easily simply use a backpack. My commute, before COVID changed the world, used to be 15 very hilly miles each way, with around half of that on narrow and often debris-strewn, bumpy rural lanes. Despite that, for quite some time, I cycled with a backpack.

While you’re here, why not go have a look at my unique T-shirts? The designs are also available on hoodies, bags, face masks, mugs, and even baby clothes.

The benefit of a backpack lies in its simplicity, and the fact that your luggage remains with you, instead of with the bike, but there are many disadvantages, too. For starters, unless your ride is a short distance, at a leisurely pace, you will get a sweaty back. On longer rides, developing backache, tired arms and sore wrists is fairly common, too. When going touring, avoid using a backpack, unless you want to end up with back ache, tired arms and sore wrists.

A far better option is to carry your luggage on the bike, where again you have some choices. The first choice you have to make relates to speed – how important is that additional 0.5mph average speed to you? If you’re in a self-supported race, you want your luggage to be as streamlined and lightweight as reasonably possible, and in such a case, I expect you’ll opt for a frame-bag, perhaps a small bar-bag, and a seat-post bag. The seat post bag is where the bulk (and bulkiest) of your luggage will go.

The biggest benefit of a frame-bag and seat post bag combo is far better aerodynamics, which directly translates into either increased speed, or the same speed for less effort – both critical competitive elements in especially extreme-distance racing, but will still make a surprising difference when touring.
Calculations done in a controlled environment suggest that 2 panniers alone will be around 6.5% slower than the same weight in bikepacking bags, while four panniers will be 8% slower.
In real-world terms, that means over a 60 mile ride, you’ll be around 20 minutes slower when using four panniers.

Just be aware that not all bike frames are equal, and especially a seat bag can place considerable strain on the frame, in places it wasn’t designed to take strain. Remember that before rushing out to strap a frame and seat bag to your ultra-light carbon road bike. 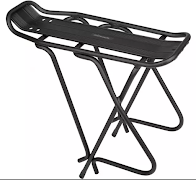 The final option is old-school: panniers on the bike. Panniers have the benefit that you can fit more things into your luggage, and that they can help reduce your centre of gravity, but at the cost of poor aerodynamics.
Yes, you will be slower when riding with panniers, even if the weight of your luggage is no more than that of a frame-bag and seat post bag combo. When riding into a headwind, you will certainly notice the difference, as the panniers will act like sails that catch the wind.

You can have rear panniers, as well as front panniers on your bike. Usually, only long-distance touring cyclists carry front and rear panniers on their bikes, with the exception of Mark Beaumont, who had four panniers on his bike during his 2008 Guinness World Record Around The World cycle ride, which pretty much was a race against the clock.

To fit panniers to a bike, you need a rack of some sort. Most rear racks have a flat platform you can load more on, but some pannier-only racks don’t have that. Panniers simply clip onto the racks. Front racks aren’t supported by a large number of bikes, so if you were thinking of fitting from panniers on your next bike, make sure the bike can take them. With carbon forks, unless specifically made to carry front panniers, I highly recommend you get expert advice, perhaps from the manufacturer, before fitting front panniers. If in doubt, play it safe and avoid fitting them.

You also get what are effectively mini front panniers, called podsacks, that can be mounted to the bike’s forks, using a special, normally plastic frame. Often, these can be fitted to bikes with forks that offer no support for front pannier racks.

I prefer panniers, for the ease of use and increased capacity, but you may feel differently. At my touring speed, I really don’t care about being a bit slower, but if you’re going to be racing, then a bikepacking setup is the obvious choice.

If you do go for a rack and panniers, be aware that not all racks are equal. The rack below is Topeak 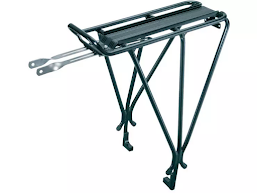 one – that’s a good brand – but I’d suggest you avoid this particular model, or racks of a similar design. The reason is simple: there is no additional support towards the rear of the rack, which becomes obvious when you compare it to the rack further above. Without the extra support, it’s possible for panniers to swing inwards, and touch the rear wheel, which could be disastrous.

Back To Basics – How to carry luggage on a bike