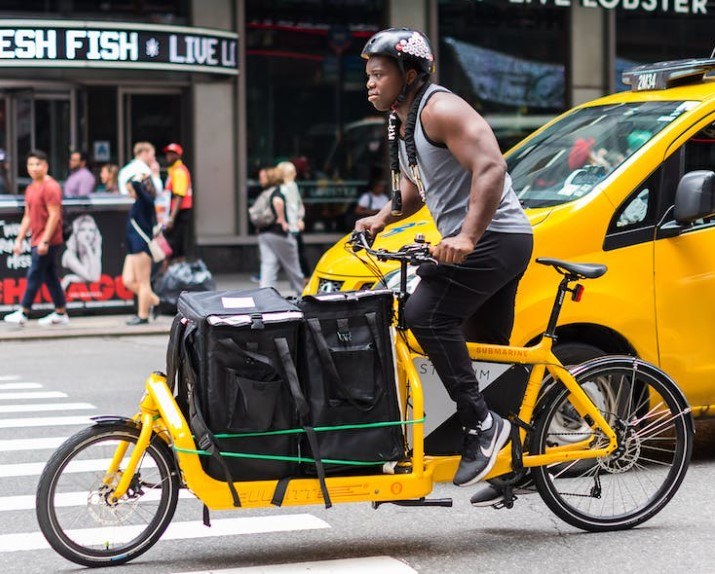 Inner-city  cargo  bikes  are  the  future

London has an Ultra-Low Emissions Zone (ULEZ for short) in an attempt to address the extreme levels of traffic pollution. Last Wednesday, the Economy Committee met to discuss the business case for shifting away from diesel vans, towards e-assisted cargo bikes. And that business case is overwhelming! After all, a new report published by the Green Alliance shows the potential of e-cargo bikes.

The  costs  stack  up

We’re not simply looking at the economic costs of running a van (averaging £0.66 per mile), compared to a cargo bike (£0.03 per mile), but the greater cost to society. Diesel vans are considered to be 67 times more damaging to the environment than cargo bikes, and that report from the Green Alliance found that replacing just 7.5% of the UK’s diesel vans with e-cargo bikes would be equal to saving as much CO2 as all annual domestic aviation. That’s an enormous difference, and would be a huge step forward in the battle against climate change.

If you were a van owner clocking up just 1 000 miles per month, and you were able to switch to using an e-cargo bike instead, covering that same distance would mean your operating costs would drop from £660 down to just £26. That’s a staggering saving of £634 per month, or £7 608 per year. Want to know the best part? Will Normal, London’s Walking and Cycling Commissioner said that cargo bikes will be included in the upcoming ULEZ scrappage scheme. That means the scrappage scheme would reward people to scrap dirty diesel vans and get a cargo bike instead.

The truth is you can, and an increasing number of tradespeople do exactly that. In London, PedalMe has been running a taxi service, and a very busy cargo service, using e-cargo bikes, and often also trailers. They carry surprisingly large loads, with ease! Increasing numbers of businesses have made the jump to cargo bikes, including Bike Bubl (window cleaners), Boilers on a Bike (plumbing services), and Donkey Jobs (garden services, window cleaning, and more). In fact, have a browse through the catalogue of cycle-based businesses and services throughout the UK – you will be surprised!

What this means is that the tired old excuse of being unable to carry tools, or building materials, on a bicycle simply don’t stand up to scrutiny. The reality is there are companies carrying all of that, plus more, using e-cargo bikes.

Directly? Absolutely nothing! Indirectly though, it would be enormously beneficial. For starters, there’s the enormous potential drop in CO2 emissions, as well as a similar drop in various other forms of pollution, meaning we’ll all benefit from cleaner air. Also, as most cyclists will tell you, white van drivers often give cyclists horrendously unsafe overtakes. If more of those van drivers switch to cargo bikes, not only will there be fewer drivers causing danger, but those drivers will become cyclists themselves. That means, they’ll soon learn (the hard way, sadly) how terrifying a close pass can be.

One thought on “Dirty diesel versus clean cargo bikes”