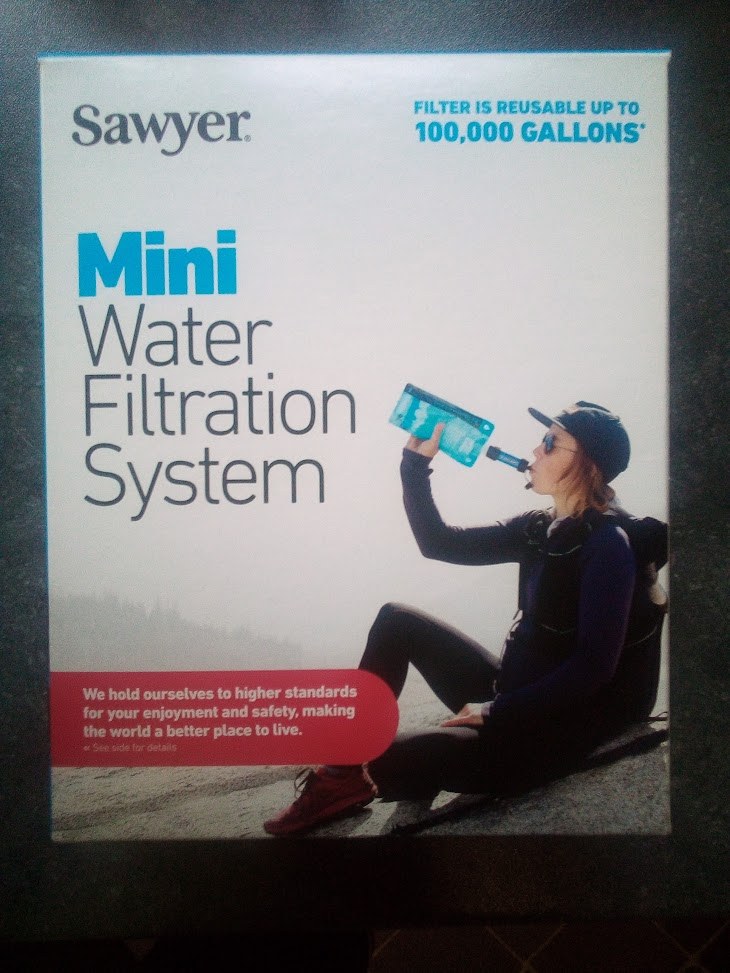 Water: the source of life

I needed a personal water filtration system, and picked the Sawyer Mini for good reasons. You consist of 55% to 60% water, and your blood is around 90% water. You need to drink water every day (even if it’s contained in other drinks, such as coffee). Though there doesn’t seem to be totally clear consensus amongst medical professionals about exactly how much water you need per day, some estimates are as high as 3.7 litres (in temperate climates).

Water and the metric system

The metric system is older than you might realise. The kilogram was originally defined, back in 1795, as the mass of one litre of pure water, at sea level. Why is this relevant at all?

Simple: though the kilogram is no longer defined in that manner, the weight hasn’t changed. That simply means every litre of water you carry on your bike is an extra kilogram of weight. If you went cycle touring, and needed 3.7 litres, that’s an extra 3.7 kg to carry on the bike!

Water is not just for drinking

To compound matters, especially when cycle touring, the water you need is not only for drinking. You also need to factor in cooking, and doing dishes, as well as washing yourself. Suddenly, the amount of water you need can easily be 7 litres, or more. That’s a lot of extra weight!

Obtaining water along the way

My advice is always that you should top up your water bottles at every available opportunity. However, when cycle touring, it isn’t always practical, or possible to obtain safe drinking water. Though the UK is blessed with many rivers and streams, there’s not a single river left in England that’s safe to directly drink from. This is where a water filtration system comes into its own.

Not all water filtration systems are equal

To begin with, there are two categories of products: those that filter out bacteria, and those that also filter our viruses. The ones able to filter out viruses are better, but also vastly more complex. Especially if you’ll be using it in the UK, there’s no need for a system that filters out viruses.

Why I picked the Sawyer Mini

Of the systems that only filter bacteria, there are several to choose from. Some require a backflush to clean it, and that puts many people off. The Sawyer Mini is one of those.

I picked the Sawyer Mini because it is cleaned by backflushing. Yes, that means I need to carry the large(ish) syringe it comes with, but the benefits include continued decent flow rate, and overall a longer life span. In fact, the Sawyer Mini is rated to filter around 300 000 litres of water. If used daily, that’s over ten years of water filtration! Sawyer claims that a proper backwashing can restore up to 98.5% of the original flow rate.

The filter is rated to 0.1 microns – a micron is a thousandth of a millimetre! You can also attach it to the water feed from your hydration pack. It filters out 99.99999% of all bacteria, including salmonella, E.coli and cholera.

What’s in the box

In the box there’s the filter itself, the 500 ml pouch that you fill with dirty water to be filtered, the syringe used for backflushing it, and even a straw. The straw pushes on to the filter’s “dirty” end, so you can quite literally use the Sawyer Mini like a drinking straw.
It has an arrow to clearly indicate the water flow direction, and a cap to close the “clean” end, when not in use.

You need to understand and accept that when pushing water through microscopic little channels, you won’t get the same flow rate as you do from your kitchen tap. There are many reviews of various filtration devices where people say the water pouch burst. That’s usually because they were applying too much force.

Accept that the flow rate is similar to what you’ll get through a straw, and you’ll be fine. A huge benefit of the Sawyer Mini is that – unlike competing products – it can screw directly on to almost any standard fizzy soft drink bottle, so even if the pouch was damaged, you’ll still have options.

The filtered water has no chemical taste to it. It just tastes like good, clean drinking water. And yes, even if filtered from fairly muddy water! If you were concerned about water-borne viruses (not a concern in the UK) I’d advise you to also boil the water you filtered.

Protect it from the cold

Like most water filters, allowing water still inside it to freeze will destroy the filter’s ability to filter out bacteria and various other impurities. Because of this, when camping in cold weather, keep your Sawyer filter inside your jacket, and keep it inside your sleeping bag at night. It can get cold, as long as there’s no risk of ice forming inside it.

The Sawyer Mini is small (and that includes the syringe) but then there is a clue in the name. It’s not meant to filter huge amounts of water in a very short space of time. Instead, it’s a personal water filter, and as such it works really well. Even backflushing it is simple and easy. Of course, only ever backflush with clean, pre-filtered water, to void contaminating to clean end. Also, you should as a minimum backflush it twice, with as much force on the syringe as you can reasonably apply.

It weighs almost nothing and allows me to be more independent, knowing I can get safe drinking water from streams and rivers, or even from ponds. When cycle touring more remote parts of Wales, or Scotland, not only does that offer a lot of peace of mind, but also can literally be a lifesaver.

Unlike other filters that don’t use a syringe to backflush, the Sawyer Mini’s flow rate should remain consistent over years of usage. All that, for under £40!

To me, this is a great bit of kit and now is an essential part of my camping kit. You can get yours here.