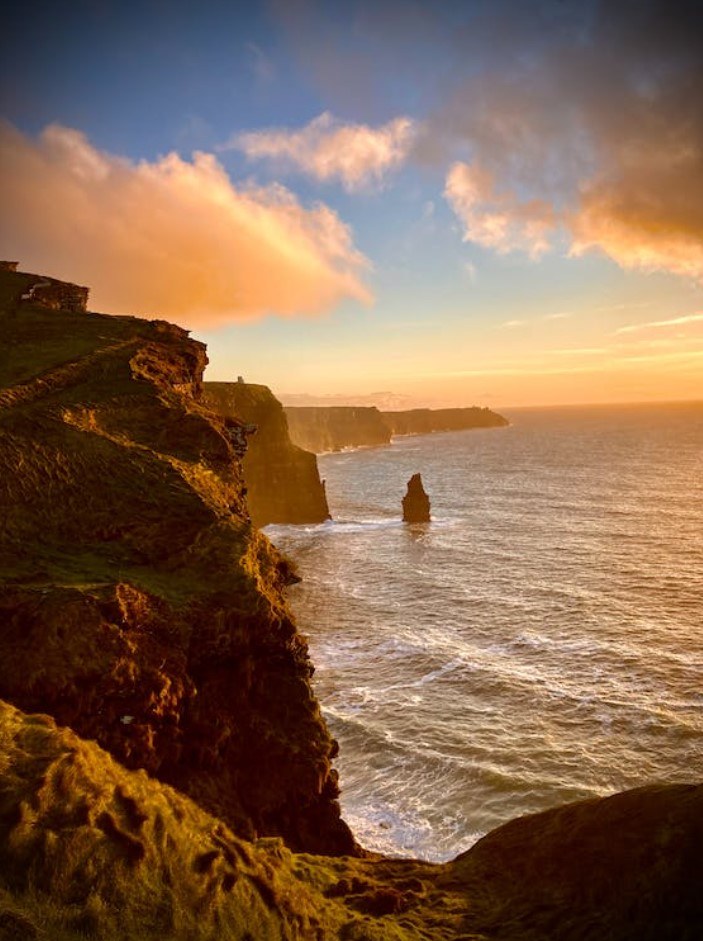 The Wild Atlantic Way is a long-distance, incredibly scenic route along the west coast of Ireland. At 2 500 km (1 600 miles) in length, it’s the world’s longest defined coastal route. Officially, it runs from Kinsale, in County Cork, up to Derry, on the Inishowen Peninsula.  Obviously, the name is that because for almost the entire route, you are within sight of, or very close to the Atlantic ocean.

Clearly I’ve never cycled the Wild Atlantic Way. Well, at least not yet – I’m planning to do so in May 2023, over two weeks. Even then, due to time constraints, I will only cycle around half of the route, from Kinsale to Galway. If I sound like I know what I’m talking about here, allow me to correct you: I know embarrassingly little about Ireland! However, I am learning about the island, and it’s people. What I can say with absolute certainty is that one of the nicest people I’ve ever known is Irish, as is one of my favourite travel authors, John Devoy. Besides, we go travel places precisely because we don’t know them! That’s the very essence of exploring, isn’t it?

Hang on – you don’t know Ireland, but you want to tell us about it?

Well, no. And also yes. Let me explain: This is not intended to be a definitive account of cycling anywhere in Ireland. Instead, this post serves as the beginning of my adventure, and my preparation for it. As I said before, I know precious little about Ireland, but I’ve been told by many different people about how kind and friendly the Irish people are. I look forward to finding out for myself, first-hand.

My route is actually Eurovelo 1. What this means in practice is that at times I’ll be cycling on the signed Wild Atlantic Way (WAW) but at other times I won’t. You see, apparently, a bit like the North Coast 500 in Scotland, the Wild Atlantic Way is becoming a victim of it’s own success, with especially campervans in abundance in summer. On parts of it, such as the Ring Of Kerry, I’ve been advised to cycle counter-clockwise. This is because the many tourist couches are mandated to travel clockwise, and that way I should at least be able to avoid close overtakes by coaches. I’ll be honest here – I have some concerns about sharing the often narrow, windy roads with especially campervans. Precisely because of that, I’ll be following the Eurovelo route instead.

That’s not a dismissive question! Instead, I’d be extremely grateful for any advice you can offer. Already I learned that pub meals would work out pricey. Also, leaving especially rural pubs might be more difficult than I first imagined, due the friendliness of the people. Further, you can get decent coffee and hot meals at most Centra shops. The biggest surprise was that wild camping is strictly speaking against the law. However, it seems it’s tolerated, provided you do so respectfully, and as per usual, Leave No Trace. I’ve learned that the best chance of seeing sunlight is during May (but it’s not guaranteed). Additionally, I should apparently be prepared for what often can be fierce winds coming straight off the Atlantic. That would partly explain the “wild” in Wild Atlantic Way.
If you know of anywhere that’s a must-see, or a must-avoid, please tell me by leaving a comment?

I’m a South African, but a permanent resident in the UK. As such I usually need to apply for a visa before visiting a great many countries. In fact, originally I was planning on cycling the Rhine in 2023, but the extreme hassle I had from the Netherlands embassy, just to get an appointment to apply for a Schengen visa was ridiculous! Because of that, I changed my plans, and will be spending my time and money in Ireland instead. And you know what? As a South African I don’t have to apply for a visa before visiting Ireland! Woohoo! That’s such a relief. It also means that there are likely to be more Irish adventures in my future.

Here’s my entire trip plan so far:
I’ll cycle to Plymouth train station, to take the train to Holyhead, Wales. From there, it’s a ferry to Rosslare, Ireland. From Rosslare, I’m hoping (the bus company have yet to confirm) to get my bike on a bus to Cork. From Cork I’ll cycle to Kinsdale, then follow Eurovelo 1 all the way to Galway. From Galway it’ll be a train to Dublin, then a Ferry to Wales, then a train to Plymouth, and finally I’ll cycle the last 15 miles home. Simple, right?

I have SO much detail to flesh out still. I’ve no idea roughly where I’ll be overnighting each day. I still have no clear idea of how much I should budget to spend each day. I do however know that some parts of the route are sparsely populated, and so have very few shops or pubs. That means I’ll have to carry extra food on the bike, and cook meals when I stop for the day. I’ll also need a water filtration system, so I can get more drinking water from streams. Somewhere in between, I need to alter my route, as I promised John Devoy to pop in and say hello, if ever I was in the area. John lives in County Cork.

I don’t particularly want to go 12 to 14 straight days without a shower, so at least some nights I’ll be staying in a formal camp site. Importantly, I also need to work out where natural exit points would be, should I need to pull out of the trip for whatever reason. As you may have noticed, I like to be prepared. Finally, I follow a fair few people who live in Ireland on Twitter, so whenever reasonably possible, it’d be great to meet up in real life, and that might dictate some further route deviations.

It will be an amazing adventure, and I cannot wait for it to start!