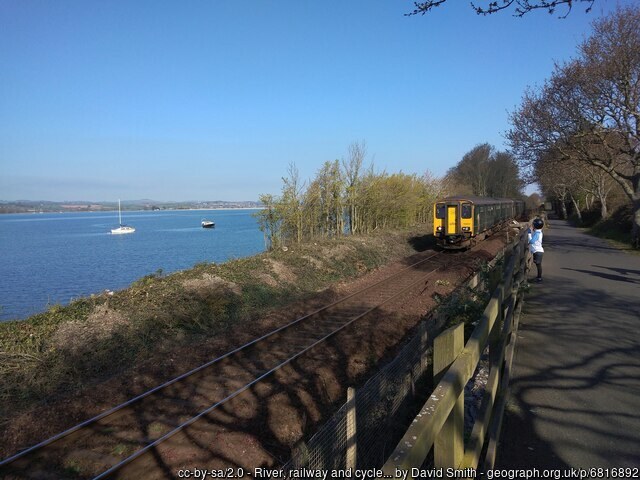 Especially in summer this route can get very busy, so if you’re planning on cycling it, you may want to set off quite early. When cycling with especially younger kids, I suggest you take the train from Exeter St David’s station to Topsham station, as doing so will cut out the busier on-road sections.

There is a regular branch line train service to Exmouth, which takes bicycles. This means you could cycle to Exmouth and get the train back. Just be aware that bicycle reservations are not possible on the train, and that bike spaces are limited, and are awarded on a first-come, first served basis.

Some of the route is on-road, and some of it is along a shared pavement on the fast and busy Exeter Road in Topsham. On that stretch, the cycle path has priority over several side roads but you must be careful along there, as far too many drivers simply don’t care about that.

The surface is good throughout, and is mostly reasonably smooth tar. There’s a section along a raised boardwalk, too.

You have plenty of options for refreshment stops along the route. Pretty much everywhere listed as having toilets (further below) also offer refreshments.

Any type of bicycle can be used along this route, however, trikes and cargo bikes will struggle in several places.

There are toilets available at Exeter St David’s train station, various places in Exeter Quay, at Saddles & Paddles, at Double Locks, at various pubs in Topsham, at the Puffing Billy Inn, at Exmouth train station, and in various other locations in Exmouth.

The best feature of this route is the stunning Exmouth beach, but the route itself is stunning.
You will cycle past the Exeter Quay area, with plenty of cafés, and along the serene Exeter canal for a while.
Exeter itself is a vibrant city that has ruins dating back to the Roman era, with remains of the original city walls still standing.

There are some chicane barriers and at least one spring-loaded gate along this route. Additionally, the bridge over the canal, where the canal joins the river Exe, is very narrow, and will probably prevent most trikes and many cargo bikes from getting through. Also, at Exe Bridges there are very sharp turns that trikes, cargo bikes and tandems may struggle with.

You can hire bicycles from Saddles & Paddles (Exeter Quay and Exeter Canal), at Route 2 Bikes in Topsham, and at Exmouth Cycles.

Forecast for the Exe Estuary Trail

Getting to the Exe Estuary cycle route

The best way to get to the Exe Estuary cycle route is by train. The route on the map starts at Exeter St David’s train station, though if you’re cycling with especially younger children, consider getting a train to Topsham instead. As ever, read my Bikes On Trains guide for useful and helpful tips for taking your bike on the train.

If driving there, there are various places in Exeter you can park close to the route. There’s a sizeable car park near Saddles & Paddles, too.