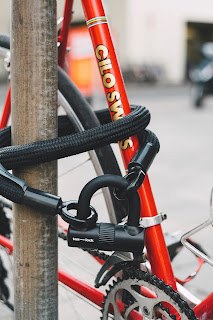 Adventure, Camping, Cycle touringNo Comments on Security while cycle touring
UPDATE:
There have been at least two recent (as of October 2021) incidents of cyclists having been attacked and having their bikes stolen in the Small Heath area of Birmingham, along the Grand Union Canal towpath. In addition, at least two cyclists were attacked by moped gangs in Richmond Park, London, and ended up having their expensive road bikes stolen.

It’s easy to say “Avoid these areas” but of course that doesn’t solve the problem, as it would simply move elsewhere. Clearly, we all do need to be vigilant out there. Canal cycling is gorgeous, but it brings with it specific problems (besides not going into the canal!): usually, you can only go ahead, or back the way you came, and often turning around would be difficult, due to lack of physical space. It also means that, when cycling a towpath, potential attackers would know where you’re heading.

My only advice is, should you have any cause to feel threatened, if at all possible, leave the canal. At all times, trust your gut. Also, consider amending your route to avoid cities, as you are likely to be far more safe in the countryside. If you can’t avoid cities, consider altering your route, so you remain in very busy areas, and whenever possible, ride in a group. Most of all, remember that these are very low numbers of incidents, and that the chances of you falling victim is exceedingly low. You wouldn’t think twice about getting into a car, despite 5 people per day being killed in car crashes every day in the UK, so these very few robberies shouldn’t put you off cycle touring.
___________________________________

After a long day of gorgeous cycling, you had a hearty meal, then settled down in your tent for a well-deserved night’s sleep. But what about your bike? Lying there with wide open eyes all night long is not conducive to good cycle touring, but then again, neither is waking up in the morning to discover your bike’s gone!

I know of at least one person who had their bike stolen while on tour. In that particular case, on a sweltering hot summer’s day they briefly popped into a shop to buy a bottle of water, and when they came back out, their bike was gone. Obviously, that also meant all their camping gear, and everything else was stolen, too. That would be an absolute nightmare!

In the film The Addams Family, the daughter, Wednesday, wasn’t dressed up for Halloween at all. When asked why not, she replied that she was in costume, adding “I’m going as a homicidal maniac. They look just like everyone else.”

Sadly, there’s great truth in those words. You see, most people are honest, but you cannot simply look at someone and see if they would be honest, or not. Now think back of how many times you may have popped into a shop, after having asked some random stranger if they’d look after your bike for a minute or two – see the problem yet?

I’m absolutely not advocating that you treat every single person you encounter as if they’re the worst criminal ever. In fact, I believe you’ll find most people are good as gold. The trouble is that you cannot easily see which people would be the exception to that.

When we cycle on the road, through a road narrowing, we ride in primary position (middle of the lane) to prevent bad drivers from trying to squeeze past where there’s not enough space to do so safely. We accept most drivers would wait until it was safe, but we’ve no way of knowing which are the bad drivers, so we take preventative action, on a just-in-case basis.

Security on tour is no different. There’s an old, rather corny saying: Love everybody, but trust no-one. That would form the basis for a good touring security strategy.

Locks
There are 4 kinds of locks you can rely on, and when I go touring, I rely on two of those. The first is the best: a D-lock. D-locks are tougher to cut through, but they are heavy and bulky.

Next is the well-known cable lock. A cable lock is far lighter, but can quite literally be cut through in two seconds with a pair of cable snips.
Less well known in the UK is an on-bike Dutch-style frame lock. These locks are permanently fitted to the frame, and locks through the rear wheel. They don’t prevent the bike from being carried off, only against being wheeled away.

Finally, there’s the rarely-used (on its own) padlock. A padlock over the chain and through the front chainring is pretty much as effective as a frame lock, but it will get dirty.

When touring, I often wear my cable lock around my waist, as it’s quick and convenient to get to, and I tend to think of it as a “café lock”, used either for very short periods of time, or when my bike will be in view, but not next to me, while I’m sat at a café.

For anything else, I use both the D-lock and the cable lock. When camping, unless there is secure bicycle storage available, at night I try to D-lock my bike to something solid, like a fence. That’s not always possible, so sometimes I D-lock the front wheel to the frame, use a cable lock to lock the seat and rear wheel to the frame, then lie the bike down flat, next to my tent. I then use a 2nd cable lock, to secure the bike to one of the flexi-poles of my tent.

Yes, of course it can easily be unhooked from that, but doing so would shake the tent enough to wake me, which at least should give me a fighting chance of stopping anyone from stealing my bike.

Keeping  safe  generally
Your physical safety is extremely important, and the sad reality is that if you’re a woman, you will need to be more vigilant than I need to be. I’m not going to behave as if I’m an adult telling a young teenager how to behave here – you will know what your own appetite for risk is. Besides, I’ve taken huge risks with people, without being disappointed.

Some basic tips wouldn’t go amiss, though: every city on earth has more seedy parts, and obviously you’d want to avoid those, if you can, especially after dark. Usually, some research done on the web beforehand  can help identify such areas, but remember that people leaving reviews aren’t always accurate in what they said. There are various claims of “no-go” areas in the UK, but in reality none exist.

I find that applying some common sense, sticking to busier areas – not always possible, when some cycle routes take you down some dingy alleys through industrial estates – and most of all, trusting my gut works well.

In towns and cities, especially when using public loos, consider taking your panniers inside with you, if at all reasonably possible. At very least, remove your cycling computer, your phone, and similar high-value items from the bike, before locking it up and walking away.

Camping  safely
On a camp site, you’ll usually have the added security of other campers on the site, but do yourself a favour and ensure your bike is always securely locked with at least a D-lock.

Wild-camping, though, is a different story, as you could be all alone. There are some rock-solid tips to apply:

Trust  your  gut
Always trust your instincts. If you find yourself in a situation that makes you feel uncomfortable, then leave. If, while cycling, you encountered another cyclist who joined you, and you’d rather be alone, be open and upfront about it, thank them for their company, then tell them you’d rather be on your own.

People are good, in the main, and while being polite is almost always a good idea, don’t be afraid of upsetting people. It’s your tour, and you’ll do it on your terms.

Cycle  touring  is  safe
After all the scare stories above, remember that cycle touring is and remains very safe, and the very best way to see an area. There simply is no other way of touring that offers the same degree of flexibility, and I’ve no doubt you’ll enjoy it as much as I do.