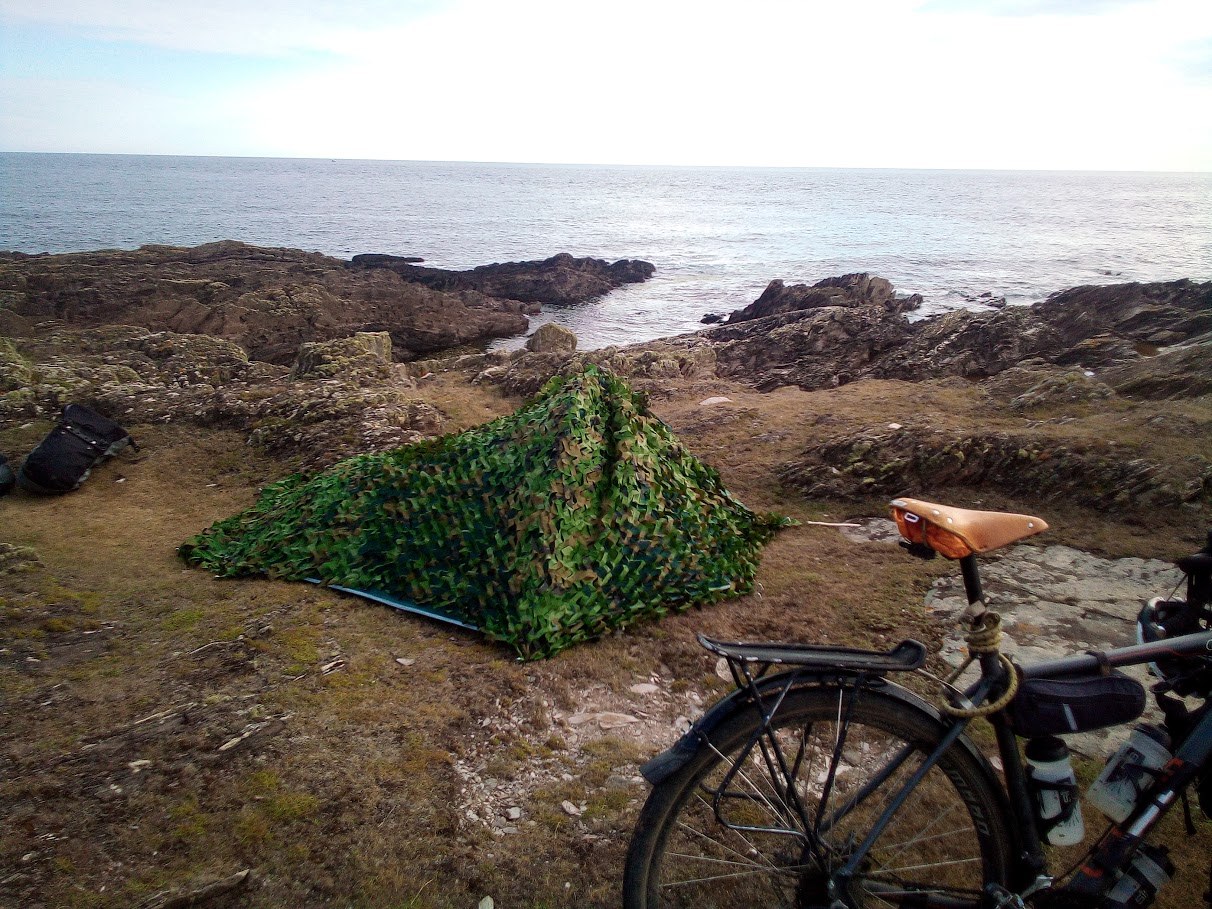 Stealth camping is wild camping done in such a way that nobody knows that you’re there. There are various reasons why you may want to do some stealth camping, but usually it’s because you may not have explicit permission to camp in a particular spot.

With the exception of roughly half of Dartmoor, wild camping without explicit permission from the landowner is against the law in England and Wales. Scotland has Right To Roam laws, so wild camping – provided it’s done responsibly – is not only legal there, but also encouraged. While you’re unlikely to get into trouble with police if wild camping by yourself, or in a very small group, the very best way to avoid any trouble is simply by ensuring nobody knows that you’re there. That’s where stealth camping comes into play.

There are various options for scouting good wild camping spots, and each person my have their own preferences. Mine is to start with Google satellite maps, and Google Streetview (when and where available). Google’s maps aren’t updated regularly, and can often be several years out of date. As a result, what looks like an excellent spot on Maps may in reality be a bramble-overgrown mess. This means it pays to pre-identify a number of potential camping spots, before getting there.

On the day, do try to not seem overly interested in your chosen spot beforehand. This is especially true if you can be seen by others. Remember that dogs have very keen senses, and they will find you even when humans might not (without assistance). Whenever possible, do try and avoid likely dog-walking routes as that would help you remain undiscovered.

Some people don’t understand the concept of setting up camp late, and leaving early. As a result, they think it means pitching your tent in the dark.  It’s possible to do so in pitch darkness, without any light, but that’s to be avoided if you can.  After all, it’s rather useful to be able to see what you’re doing. The trouble is that lights will attract attention, especially lights where there normally aren’t any. It’s usually far better to wait until the light starts fading before setting up camp. That way, you enjoy the benefits of natural light to pitch your tent or bivvy.

I feel a bit as if I’m instructing some raw army recruits here, but bear with me. There are eight important factors that determine what we see, or don’t see. These are:

Let’s deal with these one at a time, in terms of stealth camping.

Shape – There’s an old saying of “there are no straight lines in nature”. While that’s not absolutely true, it still applies generally. Your tent will have some rather straight lines, and those might make it stand out against the background.
Silhouette – Your silhouette, or that of your tent is a quick way for you to be spotted. The way to avoid showing a silhouette is simple – ensure there’s a background behind you. Ideally, that would be trees, or some other vegetation.
Shine – Next time you’re out in nature, pay attention to the texture of what you see around you. Very little of it will be very reflective, and almost none of it will be of uniform texture. Now compare that to your tent and your bike. In military terms, shine includes an uncamouflaged face, but for stealth camping we’re not going to go to those extremes.
Shadow – If you reasonably can, set up camp in shadow. That alone will instantly make you less visible. Obviously, the sun moves, and shadows move with it, so bear that in mind.
Spacing – Nature (generally) doesn’t do regular spacing. Especially when camping in a group, consider this when pitching your tents.
Movement – We wave at people specifically to attract their attention. When stealth camping, there may be times when you need to keep movement outside your tent down to a minimum.
Light – In the dark, even a small light can be seen from far away. Lights will reveal where you are camping, so truly stealth camping means using no lights when it’s dark. That includes using your phone, unless you cover yourself and your phone with your sleeping bag first. As a result, truly stealth camping usually involves quite early nights.
Colour – That ultra-bright hi-vis cycling raincoat really isn’t the appropriate item to wear when stealth camping. Hi-vis is obviously short for “high-visibility” or “highly visible” and those are the opposite of what you want when trying to remain stealthy. Equally, that bright-blue tent might look good elsewhere, but will stand out when trying to be stealthy. The same holds true for any clothes you wear – choose muted colours that blend in.

Wild camping begins and ends with the primary rule: Leave No Trace. That absolutely dictates no fires. Besides, fire gives off smoke, and smoke attracts attention. Attracting attention is not what you want to do when trying to remain stealthy! If you need to cook food, use a gas stove, or an alcohol stove. It’s usually a good idea to cook your meal in a different spot to where you’ll be camping overnight. That way, cooking smells won’t reveal your camping spot. If within possible earshot of people, gas stoves can be quite noisy, so if you are going to cook at your camping spot, and there’s a risk of people hearing you, use an alcohol stove instead.

In the mornings I’m usually less fussed about remaining stealthy, especially if I already packed up my kit. That means I’m happy to brew up a steaming mug of coffee at my camping spot. After all, I’ll be moving along within minutes, so being discovered at that stage is no big deal to me.

Before the light fades, pick the spot where you’ll go to wee, should you need to go for a wee in the night. Doing so will allow you to familiarise yourself with the route to that spot. If you need a poo, and it’s possible, try to wait until you can get to public toilets. If not, then you need a small trowel (or similar) to dig a hole. Toilet paper isn’t nearly as biodegradable as you might think, so place any used tissue in a plastic bag and take it away with you when you leave. Dispose of it in any dog poo bin. It’s possible to burn the tissue, but I normally advise against doing so, due to fire risk. After all, tissue paper blows around easily in the wind. Always properly cover the hole you used afterward – remember: Leave No Trace. 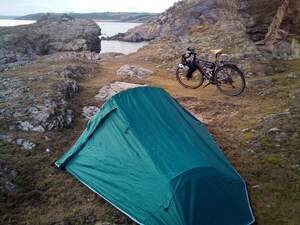 No, I’m not for a moment suggesting that you visit your nearest army surplus store and come out looking like an American Prepper. I am however saying that – if and when you can – you should consider camouflage options for kit. I recently ordered a piece of camo netting that is very lightweight, and packs up small. The idea is I can use it to disguise the shape of my tent, and help hide my bicycle. Remember, if nobody knows you’re there, nobody will tell you to leave. There’s value in remaining stealthy.

Compare the image further above, where my tent has a camo net over, with the pic of the bare tent.

Keeping  up  with  the  times

There was a time that you really only needed to worry about being spotted from the ground. Drones with cameras are very common now, and many farmers are using them now. After all, they can be a great time-saver and very useful for doing a quick inspection of your fields. Drones can also be devastatingly effective in spotting someone wild camping! What this means is you will need to start thinking in three dimensions, and try to disguise your camping spot from the air. The camo net I spoke of above would help with this.

Bicycles leave quite distinctive tracks, and those can draw attention. When you wheel a bike through knee-high grass, it will leave a very clear trail. Especially when entering a field, consider carrying your bike for the first ten metres or so. When you do start wheeling it again, don’t simply follow a straight line away from the gate. Instead, consider zig-zagging a bit, as that would make the trail you left harder to spot from the road. Again, we’re not after SAS-standard counter-tracking measures here. All we’re trying to do is to avoid attracting attention. A farmer driving past the entrance to one of their fields will wonder about clear tracks leading into the field, so try to avoid alerting them.

Respect needs to be given first. That means you need to be respectful. Respect the land on which you are camping, and respect whomever owns it. Don’t break anything, don’t make fires, and certainly don’t make a mess. Try to avoid camping in fields with livestock in it. If camping in fields with crops, remain on the unploughed edge and stay out of the crops. Most importantly, Leave No Trace!

Remember, you’re cycle touring or cycle camping. You’re not special forces, deep behind enemy lines. Being spotted isn’t the end of the world – in a worst-case scenario, you might get moved on. The only reason for stealth camping is to reduce the chances of being told to move on. However, the aim is that camping should remain a fun activity, so don’t get too hung up on the stealth aspect.

Stealth camping in the UK

2 thoughts on “Stealth camping in the UK”