I’ve wanted to cycle from Penzance to Plymouth for ages now, hugging the coastline. It’s an absolutely stunning part of the world, though as anyone would tell you, Cornwall is hilly. What makes things worse is hugging the coast inevitably means going up and down even more. Now to be fair, at 95 rather hilly miles, this ride is more than just a pootle, but let’s not allow details to ruin a good name, shall we?

Why  Penzance  to  Plymouth? 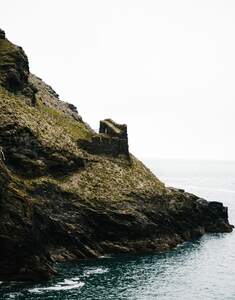 Cornwall is beautiful, and there are valid reasons why a few million Brits flood to the county each summer for their holidays. I live not far from Plymouth (I used to live in Plymouth) and I know at least part of the route well. However, most of the route will be new to me, even though I know Cornwall reasonably well. Precisely because I know Cornwall I kept on postponing this ride, instead favouring other routes, in parts of the UK I’ve never been to.

Grockle is the Devon word for holiday-makers who flood into the county every summer. In Cornwall, they’re called Emmets, but I’ll just refer to them as grockles. Every summer there are millions of grockles that pour into the two counties. In Devon it’s less of a big deal (from a cyclist’s perspective) as Devon has oodles of tiny rural lanes. In fact, Devon has more miles of road than all of Belgium, so you can usually cycle on a quiet rural lane. Cornwall doesn’t have the same advantage, and even the rural lanes often get swamped with grockles. Sadly, many grockles drive huge SUVs and have zero ability to reverse and even less of an understanding of how to drive on such rural lanes. In practice, this simply means I try to avoid cycling in Cornwall during the high season, hence the reason for this ride being in mid-September.

The plan is rather simple: catch the train down to Penzance, mount my bike, and keep the sea on my right as I cycle to Plymouth over three days. Oh sure, there are details needed, like where to camp for each of the two nights, but I’m sure I’ll find a suitable spot along the way. As per usual, I will be making notes along the way, as this route will also be released as a GoCycle route guide. This route is exquisitely beautiful, but also challenging. There are very steep hills, and plenty of them, and there are segments where you will probably want to walk your bike, including down a long flight of stairs. There are also short sections that are on busier roads – these are sadly unavoidable. I believe the rewards will more than make up for the challenges of this route though.

Autumn isn’t the greatest weather in the UK, and while I was hoping to have had an “Indian summer” period of warmer, drier weather for this ride, the reality is I’ll probably get a soaking on each of the three days. Though unfortunate, it’s not the end of the world. After all, skin’s waterproof, right?

I’ll be live-sharing my progress on this ride – just click the Where’s Will Now link at the top. Obviously, the map will only update while I’m cycling, and I’ll stop sharing well before I get to my camping spots.

If you see me out on the road, give us a friendly wave (and a wide overtake, if you’re driving!)